1298 A Lincolnshire Assize Roll for 1298 page 154 – 155 “VIII. MUNICIPAL BAILIFFS. The burgesses of the boroughs mentioned below held the profits of them – not the lands – at farm of the king, and their baliffs, accounted at the Exchequer once or twice a year in the same way that the sheriff accounted for the farm of the county. ……. …. Caistor 1297 Michaelmas: Nicholas of Kelsey, the same

A copy of a postcard in Dropbox

Text “It has been suggested that the straight stretch of road that runs from Caistor over the moor towards North Kelsey must, because of its straightness be of Roman origin. This line admittedly passes close to the known Roman site on Smithfield Farm, but it has been pointed out that the road appears to be associated with the enclosure of Caistor Moor in 1814 for the enclosure map shows it making a right-angled bend to avoid the House of Industry. Thus it would seem to be more likely of much later date than Roman period. Moreover, no metalling has been found further west, so that it does not appear that the enclosure road ran on top of a Roman one. Extracts from Roman Lincolnshire by J B Whitwell (Page 54)”

LINCOLNSHIRE CHRONICLE
August 19th 1853
ILLNESS – We have to report a fearful amount of illness in this district; children have been subject to fever of different kinds. In North Kelsey and other villages there has been great mortality. We suppose this, in some measure, is owing to the miserably defective drainage. The stench emitted from some of the “gratings” is horribly offensive, and the accumulation for a long time of vegetable matter in some of the yards and lanes is enough of great foul disease. We shall never see any permanent improvement until some responsible person is appointed to watch over the health of the public; death however will be permitted to do his office ere anything practised is accomplished.

LINCOLNSHIRE CHRONICLE
April 16th 1858
BRIGG – John Briggs, farm servant, of North Kelsey, was charged by PC Munks with riding on the shafts and furious driving at Grasby. The facts were fully borne out by the evidence and the defendant had to pay 19/6 and 10/6 costs.

LINCOLNSHIRE CHRONICLE
July 28th 1859
The Last of the Weavers – At North Kelsey, Moss was the survivor in the trade, but for many years was obliged to work as a labourer. The same remarks apply to Brown of Grasby.

PETTY SESSIONS. WEDNESDAY.—Before Mr. F. A. Dorrington (chairman), Mr W. H. Coates, Mr W. CampbelL, Alderman W. Frankish. and Mr. W. W.Underwood. Mr. Wattam Cox, farmer, North Kelsey, was charged with being drunk on licensed premises. The Butchers’ Arms. North Kelsey. P.C. Stamp said defendant stated that should not home until he had had more beer, but both the landlord and landlady refused to serve him. Cox struck the landlord with his flat hand. —Defendant called his son, who denied that his father was drunk, but admitted he “was not sober.”—Defendant was fined 2s 6d and costs.
Charles Jacklin, shoemaker, cripple, living in North Kelsey, summoned Herbert Chamberlain, wheelwright, of the same place, for assault. Complainant stated that defendant said if he didn’t ” “stand” 6d for beer he should put his head in a bucket of lime. Defendant had had some drink. Defendant admitted the assault, but said the affair was “only a bit of fun.”—The Magistrates, however, did not accept this view, and fined defendant 6d and costs’.
Benjamin Drury did not appear in answer to a charge of being drunk on licensed premises at North Kelsey, and the case was adjourned until Saturday.
Frank Whitelam, a North Kelsey youth, pleaded guilty to firing a gun within 50ft of the highway. P.C. Blythe who was passing at the time, was struck by some of the shot.—Defendant expressed his sorrow, and Inspector Camm withdrew the case on the defendant paying the costs, 2s 6d. Hull Daily Mail – Friday 30 November 1900 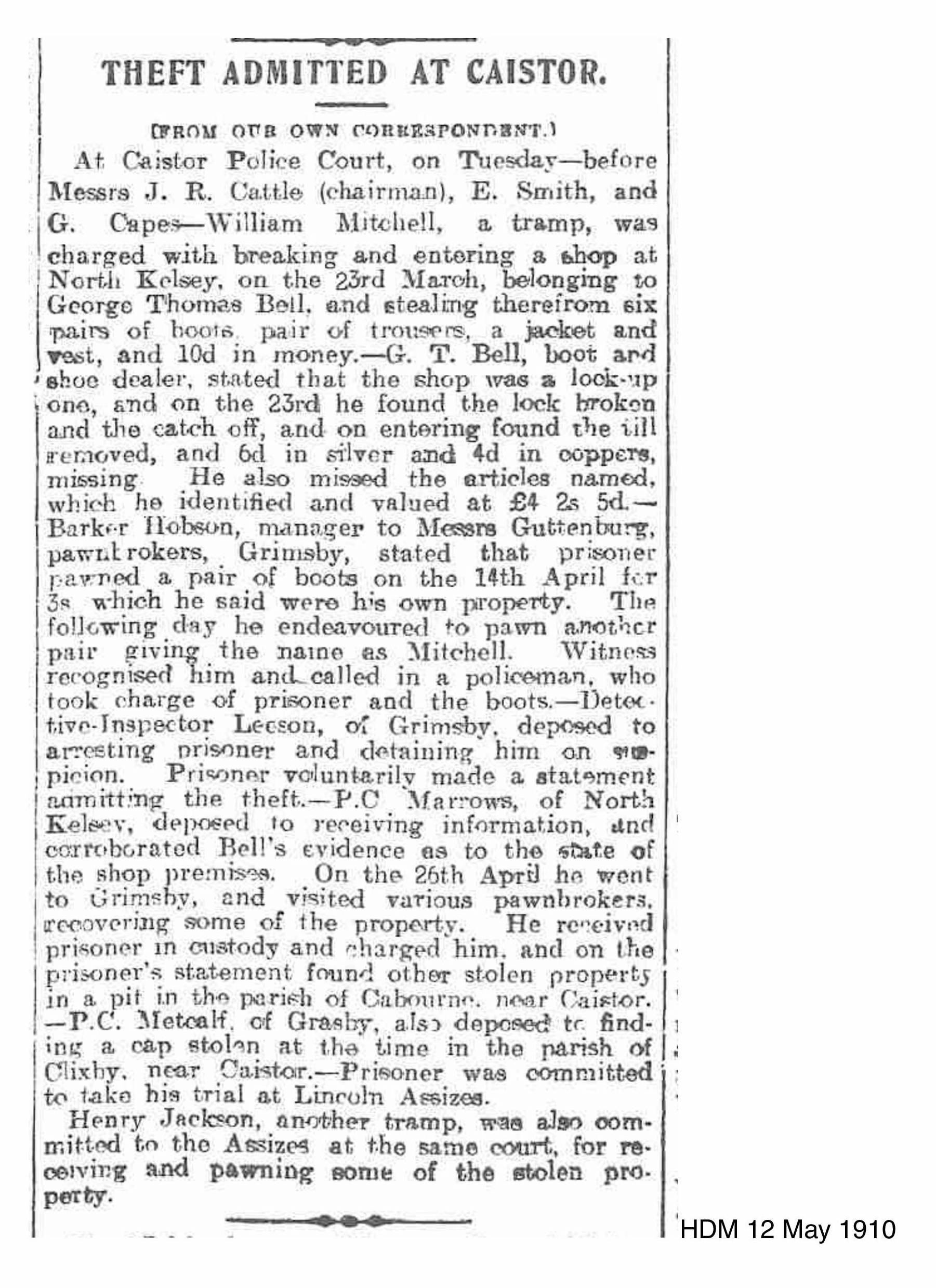