TOWN, AND VILLAGE SKETCHES IN LINCOLNSHIRE.
No. 4: BROCKLESBY.
Brocklesby, embosomed in sylvan scenery, consists at almost entirely of the hall or mansion (known as Brockclesby Park) of the Earl of Yarborough, the retainers residences, the rectory, and the Church of All Saints.

It is also the locus of the far-famed Brocklesby Hunt, and has been the seat of the noble family of Pelham for centuries.

The Earls of Yarborough are descended from the families of Anderson and Pelham. 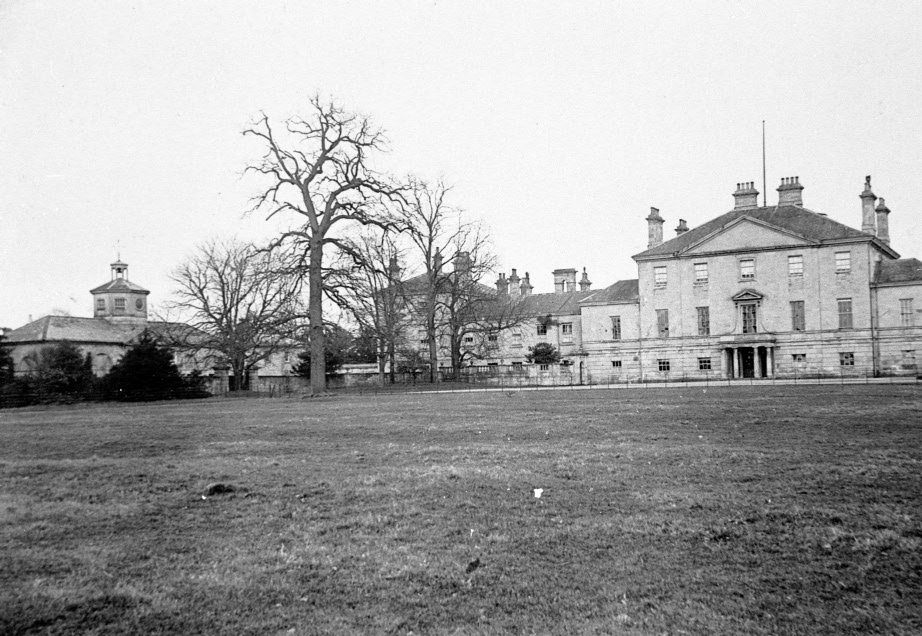 Sir Edmund Anderson was Lord Chief Justice of Common Pleas in 1572, his son, Sir Francis, was knighted by Queen Elizabeth, and a descendant, Francis Anderson, Esquire, of Manby, great- grandson of the Lord Chief Justice, married (May 19, 1708) Mary, daughter of Charles Pelham, Esq., of Brocklesby.

In the course of time the estates descended to Charles Anderson, Esq., of Manby, eldest grandson of the above Mary Pelham, who took the name and arms of Pelham, in compliance with the will of his great uncle.

The Pelhams were not unknown in the land anterior to the Conquest, but the first who distinguished himself was Sir John Pelham (temp. Edward III.). He was present at that famous English victory, Poitiers (fought September 19, 1356), and was one of the knights who became renowned by capturing King John II. of France, who delivered his sword in token of surrender to Sir John Pelham; the weapon was generously returned by the gallant Englishman, who retained the belt only as a trophy, the buckle of which, displayed in the family arms, is still significant of the deed of valour performed upwards of five hundred years ago. King John of France was afterwards imprisoned for many years in England, amongst other places at Somerton Castle, near Lincoln.
The next Sir John, son of the above, was equally distinguished, both in camp and court. He was a follower of Bolingbroke (son of John of Gaunt), and landed with his ambitious leader at Ravenspurn, afterwards proceeding to Hull to capture that important place, but old John De Tuttebury, the then Mayor of Hull, and the inhabitants generally, were too loyal to King Richard to open the gates to the new claimant. However, as is well known, Richard succumbed to his warlike adversary, and Sir John Pelham fought beneath the victorious banner until it waved over Bolingbroke as Henry IV. He afterwards distinguished himself in the wars of Henry V.

From him descended Sir William Pelham, Knight, one of Elizabeth’s gallant warriors. In 1562 he was at the taking of Caen, in Normandy, and in the following year was wounded at Havre de Grace. He was afterwards Lord Deputy of Ireland, Master of the Ordnance, and a Field-Marshal. His only son (William) was also an illustrious knight and soldier, who, after much service on the Continent, retired to Brocklesby, where he died July 13, 1629, and was one succeeded by another William (afterwards Sir William), who in the Civil War raised a regiment of horse in the Royal cause, and acquired considerable military renown. He had seven daughters and five eons; one of the latter – his namesake, William – was killed at the siege of Newark, in 1644.

William’s brother Edward (his father’s second son) succeeded, but dying without issue was followed by his brother Charles, whose third wife, Elizabeth (daughter of Michael Wharton, Esq., of Beverley, and granddaughter of Lord Poulet, of Hinton St. George, in Somersetshire) was mother of the Mary Pelham who espoused Francis Anderson, of Manby, in the spring of 1708, as mentioned above, thus the two ancient families became united.

The Yarboroughs also, by marriage, became connected with the ancient line of the Worsleys, a family pre-eminent in the annals of the Isle of Wight from remote times. On the Dissolution of Religious Houses the manor and lands of Appuldurcombe (i.e,, apuldre combe, the apple-tree hollow) was granted, to Sir James Worsley, the then Captain of the Island. Sir James’s son Richard here entertained his burly Sovereign Henry VIII., and that Sovereign’s ill-fated minister Cromwell (A.D. 1539).
A later Sir Richard enshrined in this spot a magnificent collection of antiques, statuary and paintings, but these have been removed to Brocklesby. Appuldurcombe House is an imposing mansion of Portland stone, backed by a fine mass of deep dense woods. The park was laid out by the celebrated landscape-gardener, Launcelot Brown “Capability Brown,” so called from his constant use of the phrase.

Godshill Church, the burial place of the family, covers the kneeling monuments of Sir James Worsley and his wife Anne; also a memorial to a James Woreley, Captain of the Island (1595) and his two sons, who in boyhood met a melancholy fate by an accidental explosion of gunpowder in the gate-house at Appuldurcombe. There are other monuments to the Woreleys, the one to the last of this famous line – Sir Richard – being erected by the first Earl of Yarborough, who married his niece and heiress.

It was at St. Lawrence, a marine villa on this estate of Appuldurcombe, that Lord Yarborough entertained her Majesty when Princess Victoria, who was accompanied on the visit by her Royal mother, the Duchess of Kent, and many of the nobility.

The Barony of Yarborough was created August 13th, 1794, Chas. Anderson Pelham, Esq., being the recipient of the honour. His son (also C. A. Pelham) was a most popular nobleman, filling many honourable offices with distinction. He gained a step in the Peerage, being made Earl of Yarborough and Baron Worsley in 1837. He was Admiral of the Coast and of the Isle and County of Southampton, Deputy Lieutenant of Lincolnshire, F.R.S., F.S.A., and last, though not least, in popular esteem, Commodore of the Royal Yacht Squadron, and by special permission allowed to fly the broad pennant. He died afloat on his splendid yacht the Kestrel, in Vigo Bay, off the coast of Spain, September 5th, 1846, his remains being brought to Brocklesby and entombed in the majestic mausoleum erected by his father on the ancient Saxon or Roman burial mound in the park. A writer in the ” Lincoln Date Book” speaks of him as “a truly noble specimen of English nautical character, (never forgetting Nelson, Duncan, Howe, and Jervis.) He was a true sailor, an enthusiastic yachtsman, ever anxious for the improvement of our naval architecture. He attended the battle of Navarino in his own yacht, the Falcon! He has had worthy successors, but none have inherited his nautical proclivities. In 1849 an obelisk was erected to his memory on the summit of Bembridge Down, in the Isle of Wight.

But to return to Brocklesby, a contributor to the Ilustrated London News in 1856 writes: “As you ride by the road from Brocklesby to Grimsby you pass through Aylesby at the foot of the Wolds, a parish with one church and two farms only, one of which was occupied for many years by Mr William Torr, of Shorthorn and Leicester sheep celebrity. The outhouses of this farm, though used as stables, were up to recent times called “The Kennels,” as upwards of 150 years ago Sir Thomas Tyrwhitt kept a pack of hounds here. By a a mem., in possession of the Yarborough family, dated 2 April 20, 1718, it is agreed between Sir John Tyrwhitt, Charles Pelham, Esq., and Robert Vyner, Esq., that the fox-hounds now kept by Sir J. Tyrwhitt and Mr Pelham shall be joined in one pack, and the three have a joint interest in the said hounds for five years each for one-third of the year,” the establishment “to consist of sixteen couples of hounds, three horses, and a huntsman and a boy. ” It would seem the united pack soon passed into the hands Of Mr Pelham, and down to the present day the hounds have been branded with a P. From 1746 the kennel stud book has been distinctly kept up without a break. In the first Baron’s time his ” country ” extended over all the South Wold district, including the present Burton Hunt, and even part of North Nottinghamshire. The old lord used to go down to these districts for a month at a time to hunt the woodlands. At that period the country was for the most part unenclosed, there only being three or four fences ‘twixt Horncastle and Brigg, a distance of about 30 miles. The kennels are now almost within ear-shot of the hall, but effectually screened by a deep grove of shrubs and lofty squirrel haunted trees. Some kennels may be more favourably situated, but no true sportsman ever followed the Brocklesby hounds on a good day, and they have their full share of such, without owning that taking it all in all it was one of the greatest treats ever enjoyed.” It may be noted as a remarkable fact that four generations of huntsmen of one family (Smith) hunted the Brocklesby hounds for more than a hundred years.

Brocklesby Park, proper, about two miles in length and one in breadth, studded with fine plantations and immemorial trees, contains also a large herd of deer. The mansion, enlarged and modernised in recent years, is the home of a valuable collection of paintings and sculpture. In the park, on a commanding eminence, stands the Mausoleum, before mentioned, in the form of a temple, built by Wyatt in the closing years of the last century, at a cost of about £30,000. It forms a fitting addition to unstinted natural beauties of the domain, which were yet further enhanced in 1864 by the erection of a memorial archway in memory of the second Earl by his friends and tenantry. Adjoining the park is Newsham lake, a small, yet picturesque, piece of water, formerly belonging to Newsham or Newhouse Monastery. Premonstratensian Canons (commonly called White Canons), the first of the order feunded in England. Peter de Gousle, some authorities say Peter de Saulia, was the originator about 1143. It was dedicated to St. Mary and St. Martial. The order rapidly increased in England, as in the reign of Edward I. there were 27 monasteries scattered throughout the kingdom, whilst Christendom was supposed to contain 1,000 abbeys, 800 provostships, a great number of priories, and 500 nunneries. The dress of the canons was white, with scapulary before the cossack, and a white cap or biretta. At the Dissolution (26th Henry VIII.) the fraternity of Newhouse consisted of one abbot (Thomas Harpham) and eleven canons. The property was granted four years afterwards to the King’s gallant and accomplished brother-in-law, Charles Brandon, Duke of Suffolk.

The Church of Brocklesby, a handsome building, with ” a rather unusual belfry and a leaden spire,” is embellished with stained glass windows and contains some ancient monuments and memorials to the Pelbams. A Theophilus Brittaine was rector here till ejected by the Act of Uniformity in 1662. After suffering imprisonment at Lincoln and Grantham, he died in 1696.

On the summit of Cabourne Hill, near Caiator, high on the Lincolnshire Wolds, is a granite structure about 150 feet in height, named Pelham Pillar, erected by the first and second earls in commemoration of the planting on the estate betwixt the years 1787 and 1823 of the enormous number of 12,552,700 trees. A beautifully varied prospect, embracing both land and water and the stately fanes of York and Lincoln, may be enjoyed from the top of this lofty tower. Hull Packet – Friday 06 July 1883