“Horse Market row exists, opposite the Spar shop. It is a three storey block, originally of 6 dwellings. Now 1 & 3 are merged together. 5 is still a single, and 7-9-11 merged into one dwelling. The block is grade 2 listed and dates back to late Georgian period c1820. It is a sister block to Quarry Terrace on Grimsby Road.” Information from Alan Caine

Sarah Morton Robinson – Use to skive school and hang out in the laundry!! I loved the sweet van that use to come to the village!!! ….

Mat Cleve – We put a lot of money into those machines on the wall.

Stephen Kerrawn – It was Mr and Mrs Edis  that had the launderette installed, so it must be during or after their time.

Paul Edis- Mum had it when this picture was taken. Dad had a consignment of wood which was used above the door. The wash tub came when i was still at school. Happy memories of growing up I remember and still have some of the posters etc.

Sarah Ralph – I remember spending a great deal of my pocket money in there! 10p a week!

Ann Hills – Before Mrs. Edis had it , I think it was owned by a Mrs Walton.

Ivan Baker – George and Marjory Walton had the shop previously.

Adrian Degnan – I also vaguely remember some vending machines outside Bontofts and outside the old Co-op where the pizza place is now. Not sure what was in them.. chewing gum, I think, but could just as easily have been No6.

Julie Walker-Jones – I remember those outside Bontoft’s had ciggies in one and Cadburys Fruit n Nut/wholenut in the other.

Johnny Patterson – I remember them. There was fruit and nut, and whole nut. I remember Killer kicking them off the wall one night after a town hall disco. I think I gained about  £1.30 in ten pences!! 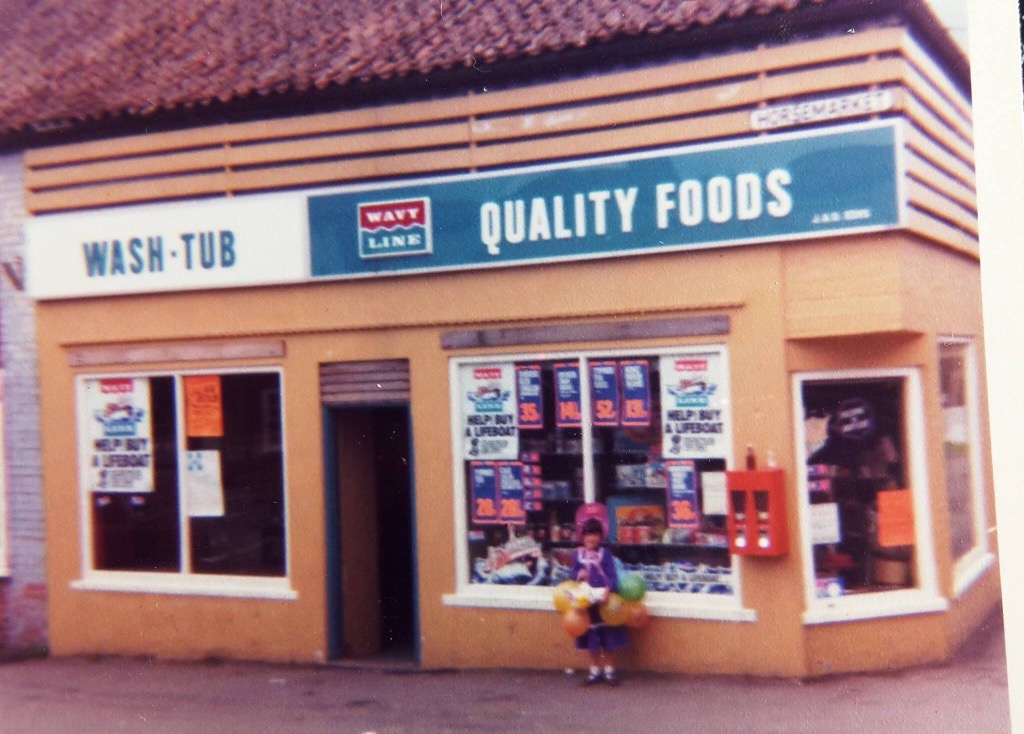 Jean Carrick of Carrick’s shop in the Market Place – “I remember the lady (Mrs. Edis) who had the Spar shop in those days used to buy tinned petfood from us, she found it better to buy from us at our price than to have to buy from a wholesaler and she could still make a profit.”

Mrs. Edis was on town council at one time As well as the shop it was a laundrette.

Jan Clayton – I remember Mrs Edis, I use to live in the cottage next to the youth club, what is now the heritage centre in 1974/5. She had a loaf of bread & pint of milk on order for me every day.

Sonia Bryant – made many trips to spar and the adjourning laundrette as a kid when mrs edis had it, used to get the penny sweeties from there

Lesley Cody – I worked at Edis’s shop as a Saturday girl whilst I was still at school. I worked with Mrs.Gray who was a wonderful elderly lady and I enjoyed working with her, she had a brilliant sense of humour.Mrs. Edis ran the shop, and could be quite tempermental, she was often helped by her sons Peter and Barry who were very friendly. This would have been about 1968 and I was there for about a couple of years.

Janine Barker – I lived across the road at no
1 and knew the family quite well, I worked there for a while. Happy memories x

Just remembered I used to visit during piano lessons round the corner opposite the stream.

Lorraine Whitehead – She moved to Thoresway after she retired. She lived in one of the cottages opposite Greens Barn in the centre of the village.

Charlie Winn –  I worked there for 10 years. I was born at Thoresway Grange.

The earliest mention of any property on the site that we have is in 1760 when an Edward Moody mortgaged it. Since Caistor Church Registers show Edward getting married in 1761 we may conclude there was a malt kiln. 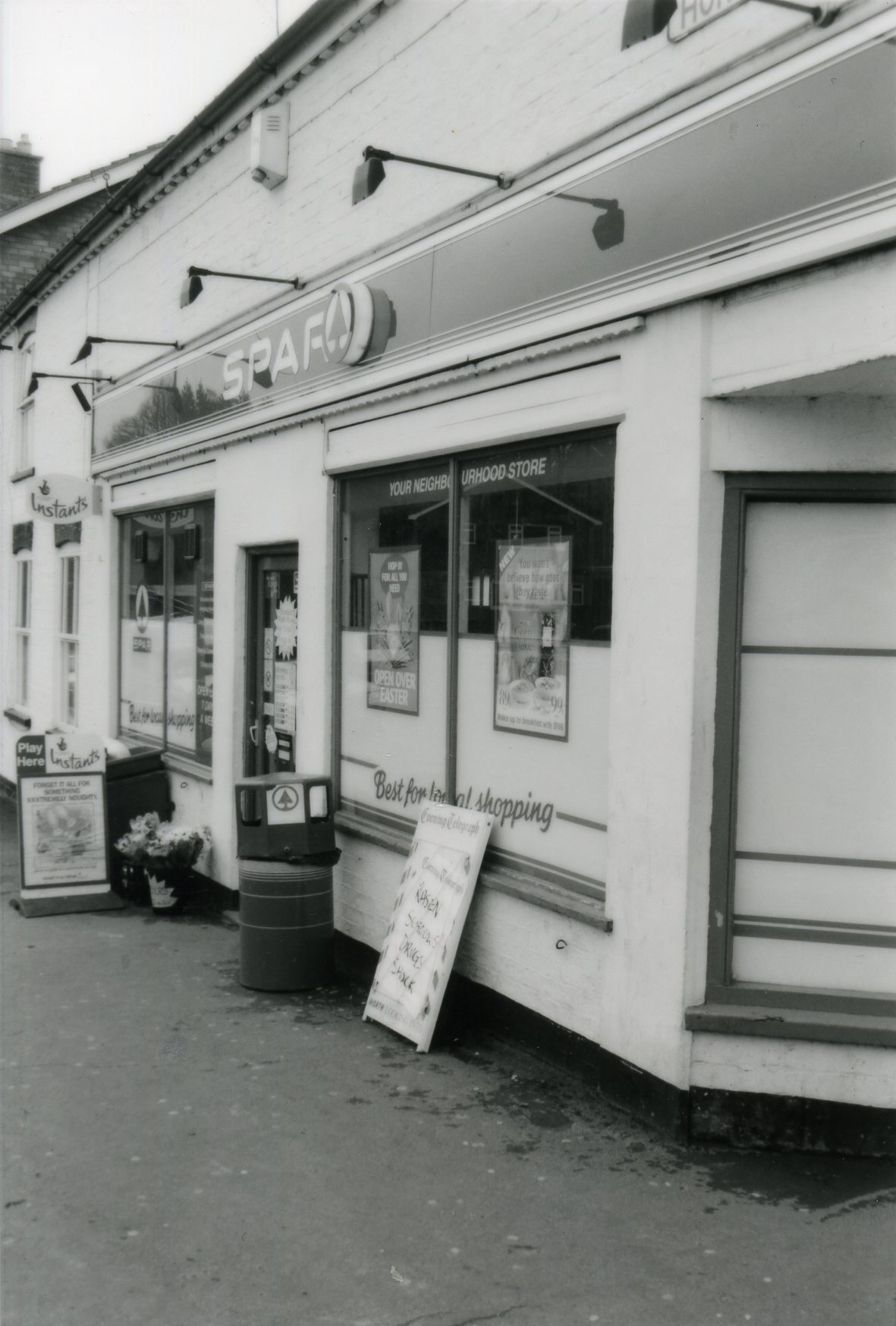 This malt kiln came into the possession of John Walesby Carr.

In 1835 he sold it to Robert Eyre, a cheesemonger, for £250. He did not want it and pulled it down and replaced it by seven cottages. So most of the present shop and houses etc date from this time.

From 1808 deeds shows a property that was originally separate. In that year Robert Hall (saddler) sold to John Hiley (currier) for £250 “all that messuage divided into four tenaments (with outbuildings) in Horse Market.”

In 1821 Hiley sold to Thomas J. Dixon and Marmaduke Dixon, who used the buildinga at least in part for their malting business.

1826 December 16th – Caistor, Lincolnshire – To Maltsters, a desirable situation for trade. To be sold by private contract, or to be let, from year to year, or for a term of years with immediate possessions.

All that old-established and well-accustomed Malt Kiln, now in excellent repair, and upon which a very considerable sum of money has been expended in fitting up the Drying-kiln and other parts of the premises upon the newest and best construction, together with suitable attached and detached out-houses and offices, and all other necessary conveniences thereto adjoining and belonging, and which is now in full trade.

The above premises are situated in the Horse Market in Caistor aforesaid, are in very good repair, and the situation is remarkably well calculated for carrying on an extensive and profitable general business.

William Malam, upon the premises, will show the same; and further particulars may be known on applying (either by letters post paid, or personally) at the office of Mr. Dixon, solicitor, Caistor.

When it was sold again in 1834 to James G. Dixon, the four tenements were described as having chambers above them used as warehouses.

When in 1866 William Shirley bought the property, it had gone down in value; he got for £100 only what was described as “two cottages with chambers overhead, formerly used as warehouses”.

The seven cottages passed from the Eyre family in 1868. The Rev. Anthony Bower, Master of the Grammar School bought them for £600. He resold a few years later to the Gas Company (of which he was Chairman

at the time). The Company only wanted some of the land, and sold the cottages in 1873 to George Shepherd, publican of the beer house in Fountain Street, for £350. George Shepherd in the same year bought the four cottages from Shirley for £

100; so for the first time recorded one owner had the whole of the present property.

The process of throwing adjacent cottages together to make a larger residence continued, for when in 1899 George Shepherd’s sons sold up for £380 the property was then “nine cottages now occupied as six.”

Charles Dixon who bought it was a shopkeeper, and for the first time there as a shop on the corner, which has now occupied most of the available buildings – in 1918 when Henry Dixon, Charle’s second son bought out his brothers for $450 there were only three cottages beside the shop, warehouse and bakery etc. David Saunders

The following three films feature Ken Clark and Arthur Clarke. They were recorded and edited by Alan Dennis.