Many thanks to Mr.& Mrs. Oxby of Canada who has set us off on the story of John Day, innkeeper at the George Inn, and his involvement with the Durham Ox. Search “George Inn” for further information.

Debbie Oxby tells us: “John Henry and sister Bridget, as well as a brother George who died as an infant, were born in Harmston to John Day and Elizabeth Oxby. Both married in Caistor, John Henry to Mary Littledyke and Bridget to her cousin Luke Oxby. I try not to bug my husband about that!

I have looked again at the 1861 census and Mary is there with 3 of her children running the Fleece Inn. Her daughter Elizabeth married George Littledyke, maybe another cousin? They are buried in the Caistor cemetery as are John and Elizabeth.”

The following is taken from Wikipedia:

The animal was born in March 1796 and was bred by Charles Colling of Ketton Hall, Brafferton near Darlington in North-East England.[1] Colling, together with his brother Robert who farmed at nearby Barmpton, was one of the pioneers of the cattle-breeding movement of the late 18th and early 19th centuries. After a visit in 1784 to Robert Bakewell, a successful breeder of Longhorn cattle, Colling began using Bakewell’s techniques to develop and improve the Shorthorn breed. The animal eventually known as the Durham Ox was the grandson of Colling’s original bull “Hubbach” or “Hubback”,[2] and became known as the Ketton Ox when he was exhibited in Darlington in 1799. He was painted as such at the age of five years in 1801 by George Cuit of Richmond.[3]

In 1801 the ox was sold to John Day of Harmston, near Lincoln, for £250 (2010: £14,900 ).[2] Day renamed him the Durham Ox and had a carriage specially made to transport him, drawn by four horses. For the next five years the ox toured with him around England and Scotland, exhibited to the public at agricultural fairs and other events. The ox proved extremely popular. For most of 1802 the Durham Ox was on show in London, where it is recorded that in one single day admission fees to see him totalled £97.[4]

A dedication accompanying a painting of the ox by John Boultbee (1753–1812) in 1802 gave details of the animal’s measurements and estimated its weight as 171 stone (1,086 kg),[3] but later estimates ran as high as 270 stone (1,715 kg), although there may be some confusion as the stone was not a standardised weight at the time. Whilst his size and weight partially accounts for the admiration he attracted, he was also regarded as a particularly fine and well-proportioned example of his type, at a time when the concept of selective breeding for particular characteristics was just becoming established in agriculture. 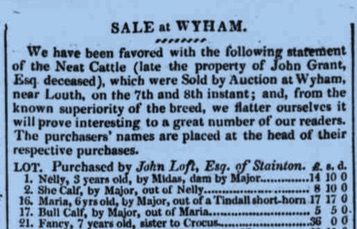