Carol Barnes – He played in the Optimists dance band. He played an accordian. He worked in the Rent and Rates Office of Caistor RD for many years. He had a wife called Phil and a lovely daughter Jennifer, a very talented pianist. Jennifer died aged 11 of Leukaemia. She collected beer mats. Fred’s Mum and Dad lived in the first cottage in North Street. It was the end of the row of houses along walk which lead to Canada Lane.

Fred Collishaw worked in the Rates Office of Caistor RDC along with Alan Lockington and Stewart Davis. I worked in the Treasurer’s Department and would sometimes work in the collecting office. Alan went out round the villages collecting rents and so did Stewart. Whilst I was there the Council bought a main frame computer which took up the whole of the bottom office. The accounts where done on an National Cash Register accounting machine and Margaret Riggall nee Mason was in charge. I worked out and made up wages in little brown packets having collected the cash from the National Provincial Bank in the Market Place. Council rents were means tested and tenants submitted there details for me and Eric Dawson to process. Eric was a delight he smoked and enjoyed a joke. He said without fail when entering his office “put wood in ‘ole” 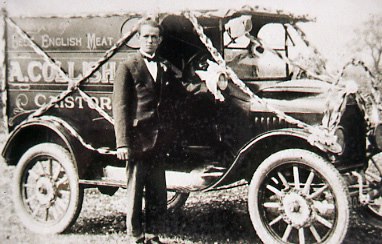