Rev. David Saunders “Caistor Market Place   “… One of the earliest references to it is in 1806. It was up for sale because Joseph Bell had gone bankrupt. The Land Tax records take us back even further to 1782. The show that, as with” next door”, it was owned by Walter Wailsby, and Joseph Bell was already the tenant. After 1806 I am not certain who followed Mr. Bell, but the Land Tax records suggest that Lord William Beauclerk had bought the property, and the tenant was Redshaw Spring, draper and grocer. However he too went bankrupt (1810), though he was still there in 1813. Then in 1815 the tenants were Marris and Towle. A year later Mr. Thomas Towle was on his own. In 1820 Lord William Beauclerk became the Duke of St. Albans, and for 1822 we have the amount of rent Mr. Towle paid – £21 twice a year. This ended before 1825, for Mr. Towle bought the property. He played a large part in the life of the town, and was a Churchwarden at least three times, and also was an Overseer and a Guardian. Despite taking on these public duties, he was a keen Methodist, and politically a Radical / Liberal. He supported Sir Culling Eardley Smith, who was not popular among the local farmers etc., and an adversary of the Rev. George Watson, the Vicar. He retired in 1835, selling the property and business to Frederick Stubbs. Mr. Stubbs was a man with big ideas and plenty of ambition, who, I believe, over reached himself. He went bankrupt and was sold up in 1842. The description of the house and business is interesting:-

‘A message, and an old established shop, with extensive warehouses, outbuildings etc. With a 30ft frontage, on the Market Place extending backwards to another street, also with a 30ft frontage. Drapery etc. Has been carried on for upwards of 70 years. The shop fronting the Market Place 30ft X 17ft has all necessary fixtures. At the back there is a tallow handling warehouse, carriage house, stable etc. All spacious warehouses have been built over the whole rear of the premises, in one of which is a crane for taking up heavy goods. In the yard there is a well of excellent water and a pump. The cellars are dry and capacious, dug out of chalk rock. The dwelling house has a sitting room 17ft X 12ft, a drawing room 19ft X 14ft, four bedrooms in the front and three at the back. The kitchen is 22ft X 11ft, with a scullery etc.’

The tradesmen who followed Mr. Stubbs was John Robinson, described in 1851 as a tailor, draper and grocer. He employed six men, but not all of them lived in. Two of his daughters worked for him as well as two living in apprentices. All told there were 14 souls in the house. When Mr. Robinson needed new hands, being a keen Methodist, he always stated that Wesleyans were preferred. Over the front windows was the title London and Manchester House. In some sense he would have been tied to these wholesalers with the advantage of extra discounts they offered in return for Mr. Robinson’s loyalty to them. It was one of the main functions of these larger shops that they imported luxury and stylish goods otherwise physically out of reach, for the benefit of the local gentry, farmers and fellow tradesmen etc.

When Mr. Robinson left to go farming he rented the premises to Edward Small. This man, born at East Retford, was in business at Barrow before coming to Caistor. He was a keen Wesleyan and Temperance man, and was helping found a Band of Hope in 1859. His household was smaller than that of Mr. Robinson’s, with five young children, two assistants and a house servant. From the registers of Births and Deaths we learn that he left Caistor after March 1863.

His successor, William Short Lord was in Caistor from 1864 and was still in the Market Place in 1910, but the Directory gave his 1913 address as Springfield, Brigg Road, So he had been a draper and grocer in Caistor for nearly fifty years. It was in his time that the shop was called the Central Stores. Like many of his predecessors, he was a Wesleyan. The Censuses show that the premises continued to house large groups of people:- 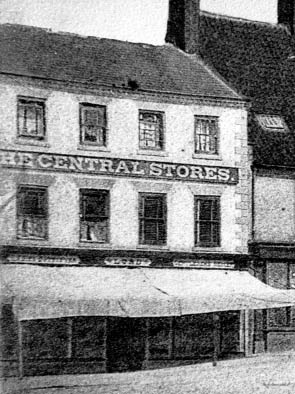 1873 Total 14. One man and three boys employed. Including himself there were nine family members. At the time he had only one child, a seven year old girl. One of the surnames was Stepnall. An Alfred Stepnall went on to have his own shop in Caistor. Mr. Lord eventually bought the premises from Mr. Robinson in 1878.

1881 Total 18, of whom eleven were family, including now two daughters. Five were shop workers of various grades. There was a mortgage of $800 in 1882, and Miss M. A. Marris held it from 1885. Charles Brown thought that Mr. Lord had obtained the premises cheaply.

1891 Total 10, of whom seven were family. There were two assistants. In the family group there was an elder daughter with two children. She had married a Baptist minister, the Rev. W. J. Hunter who died in 1899. Also in 1899 there is a note that Mr. Lord had a bus for his country trade, and that some of the warehouse had been taken over for living space.

1901 Total 7, of whom three were family and three assistants in the shop. By now Mr. Lord was 62. Their second daughter had married George Manning in 1890. He was then Master of the Wesleyan Day School, but destined to become a Congregational minister. Their son, Bernard Lord Manning, was very clever, and ended up as a Cambridge history professor.

Early C18th with early and mid C19th and C20th alterations –

3 bays on the ground floor and C19th sash windows on floors above.

E. Small ran a Groceries business from the premises prior to Mr. Lord.

George Haddesley 1880;s – “Next to Watson’s was Mr. Lord the Draper and Grocer who did a good business in addition to which he did some farming.”

In 1911 A. Radford was running a Grocery Business as well as a Draper, Hosier and Silk Merchant from this premises. He was a dealer in tea and a Provisions Merchant.

In 1911 Mr. Lord had retired and the shop was managed by a Mr. Archie Radford. Eight people were there then – Archie Radford and his wife, Julia, and five servants and a traveller.

The nephew, Alfred Stepnall, re-appeared in the Directories in 1922 on the Market Place, then Fountain Street, and finally on the High Street near the Town Hall.