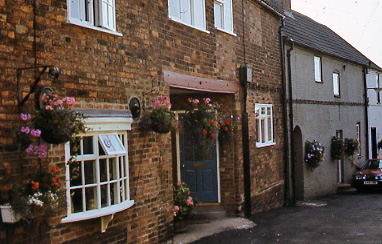 Caistor. – Fire with Loss of Life. – On Sunday evening last, a fire broke out in a small cottage in Bobbs-lane, in the occupation of an eccentric old man named Thos. Hannah, and in the short space of two hours that cottage and one adjoining were burnt to the ground, and with them the poor old man. It appears that about half past ten o’clock, Hannah was taken home by a  neighbour in a state of intoxication, and was left with a lighted candle: about half an hour afterwards, as two persons were passing the house, they observed smoke issuing from his chamber-window, with a strong smell of fire: they immediately raised the alarm, and those inhabitants who had not retired to rest quickly repaired to the scene, and set about procuring the town-engine and water-carts. After two hours’ incessant and spirited labour, the fire was so fat got under as to render the adjoining property secure.

A search was then made for the body of Hannah, which was found under his bed, and presented the appearance of a piece of charred wood: all his goods were destroyed, except a valuable watch, which appears to have escaped almost miraculously, for although much blackened by the heat of the fire, when wound up its going properties were found entire. If the fire had remained unseen for a little time longer, the inmates of the adjoining properties would have fallen a prey to the flames, for they were quite unconscious of the situation in which they were placed until roused (with difficulty) by the persons extinguishing the fire: as it was they escaped with little more than their night-clothes, the whole of their bedding and furniture being consumed: the poor man, who is a nail-maker, is a great sufferer by the catastrophe. – An inquest on the body of Hannah was held by Mr. Marris, coroner, on Monday evening, at the Windmill inn, and a verdict of “burnt to death by accident” was returned. The deceased was 64 years of age, and was a person of good character, but, like many others, he did sometimes indulge in a little drink. He was for upwards of 50 years a faithful attendant on the carriers which put up at the Griffin public-house in Caistor, and was much respected by them. He had saved some property, and was for many years an inmate at the Griffin. He was uncle to the late Mr. Wm. Hannah, of Caistor, a very extensive dealer in wool and cattle. [LRSM Friday 19 May 1848]

LINCOLNSHIRE CHRONICLE
July 23rd 1852
ROBBERY – A quantity of potatoes which were growing on a piece of garden ground near the Brigg road in Caistor, in the occupation of Mr James Button, were stolen on the night of the 10th inst. A reward of four guineas has been offered for the conviction of the offenders.