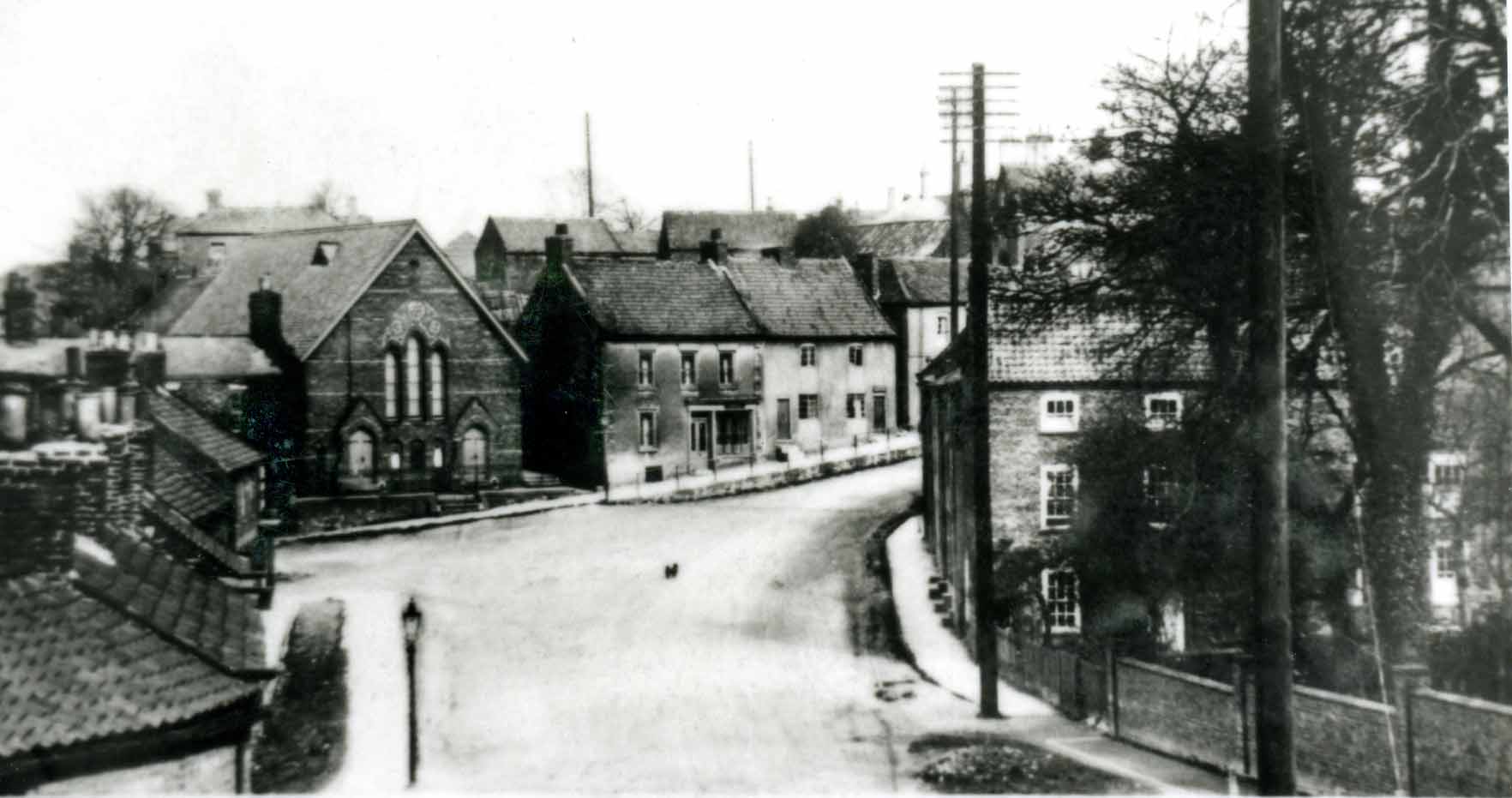 T. Campey appointed in 1860 as superintendant to the Market Rasen Circuit writing on the 27th February 1928 – “A friend of mine in Yorkshire who was considerably advanced in years, told me that when he was a young man he was in ministry for a few years, and was stationed at Grimsby, when Market Rasen, Caistor, and the whole district was missioned from there. He told me of his frequent Sunday journeys from Grimsby to preach, that would be at least 30 years before my time there, so that must be over 100 years – in fact it was in 1818…..”

Extracts from “History of Primitive Methodism in Caistor” written in the “Souvenir of Celebrations Diamond Jubilee April 1928 “H.B. Kedall, in his ‘History of the Primitive Methodist Church’ records that ‘Ann Carr and Miss Healand (subsequently married to a Wesleyan minister) preached at Market Rasen, Caistor, Tealby and Walesby in the summer of 1818.’ The following May, John Harrison crossed over form Hull to Grimsby, and walked to Market Rasen, forming there a society of eight members, and for 10 days preaching there and at Middle Rasen, Nettleton and Caistor. At Market Rasen he seems to have had a very warm reception.

Caistor was twice visited by John Harrison during this mission round. Each time, be it noted, he was accompanied by Miss Healand, whose home , we judge to have been in these parts. On their first visit they sent a bellman round to announce that a service would be held in the middle of the Market Place. Their reception was all that could be desired. The people ran together ‘as if to a bull-baiting’, until some 500 persons were assembled who, while John Harrison preached, were as ‘ still as though he had been promising them an earthly inheritance on terms of their obedience that night.’ Among those who listened were three clergymen and a dissenting minister, the latter acknowledging that open-air services might be useful to many who would not attend either church or chapel. This was on the Friday, and on the following Wednesday, May 26th, a congregation double that of the former one assembled in the same place to hear the two missionaries.

The clergyman of the place was present to hear and judge for himself, thus showing that he had the true Beroean spirit (Acts 17:11 where the Jews of Beroea, when they heard the preaching of Paul and Silas, were commended for examining the Scriptures daily “to see whether these things were so”) , and was ‘more noble’ than he of Market Rasen. At the close of Miss Healand’s exhortation he shook her hand, remarking , h

He thought it was an honour to do so. ‘I heard,’ he said, ‘such an unfavourable account of the Ranters, I thought I would come and hear for myself, and I must say I heard nothing but the Gospel from your lips. I wish you every blessing.’

….From June 7th to 11th we find W. Clowes and J. Harrison in Lincolnshire purposing to pay another visit to Caistor. But between them and their goal lay other villages which were anxious to hear the Word of Life from their lips and would not be denied; and so they got no nearer than Limber. Here Lord Yarborough’s lodge-keeper told them the villagers had long been expecting them, and they had reluctantly to forgo their main purpose.’
….In 1820 the ‘Grimsby Branch of the Nottingham Circuit of the Primitive Methodist preachers published its first plan….. and that Caistor…. figures on the week-day plan…. but does not, at this time appear on the Sunday Plan.
It would seem that the first services were held in an old house near the present chapel. Later on worship took place in a granary further up, and on the same side of Plough Hill – the site now (1928) occupied by Mrs. Broughton’s house.
The first chapel was built in 1839 quite close to the present site, and reached by a narrow passage. Its appearance was very much that of a barn with half-a-dozen windows. Evidently worship was not carried out under ideal conditions, for near-by lived Henry Day, a rag and bone merchant whose perfumery penetrated within the walls of the chapel….. this chapel was built with a debt on it of £340 (using the retail price index this equivalent in 2008 to £28,300).”
Extract from the Primitive Methodist Magazine 1854 by Thomas Kendall ….. With this large debt, and the society but small, extra efforts every year had to be made in order to meet the expenditure, which was not done without difficulty. Such being the state of the Chapel, I told the trustees and friends there was no prospect of doing much better unless the debt could be lowered, and also the rate of interest. Therefore, we laid the case before the general chapel-fund committee, and they kindly promised us £10. on condition the trustees and friends would raise £40. This offer prompted us to try; we commenced begging, and I am glad to say we have succeeded well.

On Good Friday we held our annual tea meeting in the County Court Room, kindly lent for the occasion. Nearly all the trays were furnished gratuitously by the members and friends, and we had a large gathering of people to partake of “the cup which cheers and not inebriates.” A public meeting was afterwards held, and appropriate and stirring addresses were delivered…. It was suppose to be the most interesting meeting ever held by our people at Caistor……

…. The heavy debt on the chapel has often depressed the minds of our members, and we believe prevented others from joining with us; but this discouragement we hope will now be removed. We are paying off £53 of the debt, and lowering the interest of £187 from 5% to 4½…….

Sat 27.09.1856
Cabourne -the Primitive Methodists of this village possess a splendid chapel, built in the gothic style. It is a great ornament to the village, and was mainly contributed to by a wealthy farmer residing in the place. Market Rasen Weekly Mail and Lincolnshire Advertiser

14.01.1857
Sermons – During the past week gas has been introduced into the Primitive Methodist Chapel, Caistor; and to meet the expense three sermons were preached by the Rev. T. Greenburry, of Doncaster – two on Sunday, in the above Chapel, and the third on Monday, in the Weslyan chapel, kindly lent by the Conference Methodists, the chapel belonging to the Primitives being too small to accomodate the large concourse of people assembled on the occasion of Mr. Greenbury’s sermons. The united collections amounted to more than £9. Market Rasen Weekly Mail and Lincolnshire Advertiser Caistor Gas works erected at a cost of £1400 (equivalent to £82,000 in 2011) –

“When I entered the Circuit (1860) there was a substantial old-fashioned Methodist Church, with a membership of 58, and several local preachers whose names I do not remember. My home was with Mr. and Mrs. Ringrose, at the Brick Yard, Grasby Road. There was Mr. Day who kept a hardware shop near the Church (is this the Parish Church or Chapel?) , and a Mr. Clark……
….We were just emerging out of candle light in those days, and I bought my first small paraffin lamp in Caistor for 1s 6d., and nearly frightened my landlady at Market Rasen into a fit, she was sure the house would be blown up.” T. Campey, an outstanding member of our
1860 Temperance League & the Band of Hope was formed. Women preachers were now popular especially Miss Pearl Buck of Leicester,
1862 A collection was held for the Lancashire Cotton Farmers and raised £9
1867 The old thatched cottage was pulled down.
In 1868, a number of Grasby friends made a move towards a more suitable chapel. Foremost among these were Messrs. Barkworth and John Brighton. There was still a debt of £200 on the old chapel, and the old trustees refused to proceed with the scheme unless the new trust would take over the old liabilities….. The building was, therefore, proceeded with…….
The Rev. R. Harrison’s first wife’s father was the architect, and Samuel Ellis, of Grimsby, laid the first foundation stone….
1867 On the 14th November, a stone was laid to start the new chapel. They still owed £235. The new church was built costing £280. The first collection was £12.10.0d. There were 92 members,
1870 A Sunday School was built for £70. They also raised £5 for the sick and wounded in the war.
1871 More improvements – pews removed & open seating provided. Also the pulpit was altered costing £102
1882 A knife and fork tea was held at Pelham’s pillar. Up to 3,000 people attended – Proceeds were for the Circuit Funds.
1883 Another Fete was held at Pelham’s Pillar where 5,000 to 6,000 people attended.
1886 There were further improvements to the Church.
1894 There was a Resolution to condemn dancing.
1895 A new Caistor Circuit was formed.
Some few years later it was decided to build a Sunday School adjoining,

and in 1906 this was considerably enlarged……
Anne Dawson and David Ringrose were the first scholars in the Sunday School.

…. In January 1912, a fine double-manual organ was installed in the chapel.
In 1928 there were 52 members of the Chapel and a Sunday School roll of 75.
1932 Combined meeting on alternative Sundays with Westgate using each building.

1967 The Primitive Chapel is sold and opens as a Youth Club.