Grace – “we were ‘comers-in’ from Manchester, when my father bought the business in South Street.

I left in 1925 to come back here (Manchester) to live with an Aunt & Uncle; but the family left Caistor in 1931 & returned to Manchester, when we were all together again. Mention of my father reminds me of Joseph Blacow. You may have noticed that my name was Beswick! It was a ‘step-relationship’, but father didn’t like it to be mentioned as such.”

Church Bells I wonder if you still toll the bells when someone dies. For a child, one pull on the bell; for a woman two pulls; for a man three. I can’t remember how long it continued, but long enough for everybody to get the message! It gives me the impression of a “gathered community”.

Grammar School The Headmaster was Mr. Coxon: and I remember one of the teachers lived in a house on the right side of the road which leads from the Market Place to the Church. I went down that road regularly to school, but I can’t remember its name. 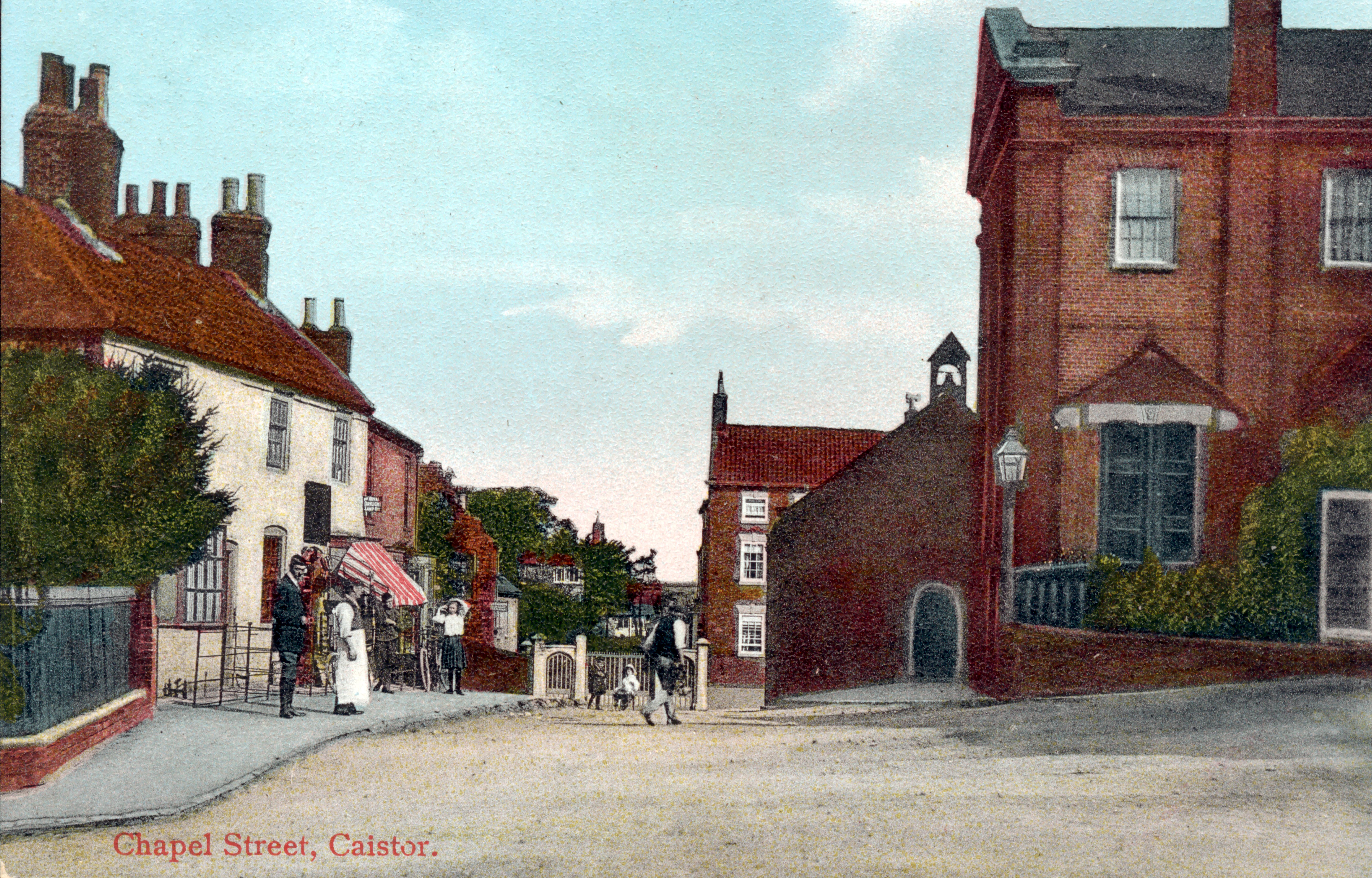 Methodist School The Headmaster here was Mr. Sleightholme, but he preferred his pupils to call him ‘boss’!!! He taught standards 4, 5, 6 & 7 all together in one room! (He added 7x for me!) Imagine that being accepted by teachers today! – but he coped beautifully, with the right kind of discipline, & I thought he was wonderful!

The schoolroom was divided by folding doors. On the other side were standards 1, 2 & 3, taught by Miss Blanchard, who lived opposite to us in South Street. She also ‘took’ the girls for domestic subjects.

The tinies were in a small room leading from the back of the main schoolroom, and were taught by Miss Mason.

Wonder if anything has altered?

I’ve always remembered “boss’s pet grouse – that the Council of years before had turned down an opportunity “which would have been of great benefit to Caistor over the years”. The railway company (I suppose it would be the London & North Eastern) wanted to bring the railway through Caistor and the council would not have it, which is why it was three miles away in Moortown. I suspect it isn’t there now!!

I have mentioned, on the back of one of the photos Mr, Russell, who met every train with his “bus”.

Mr. Sleightholme lived in a house opposite the park on South St. (I think it was still South St. down there!). He was also Choir Master of the Methodist Church.

Sunshine League What is now the “National Children’s Home”, was originally, “Dr. Stephenson’s Homes for Children”. They started this “League” in Methodist Sunday Schools, and we met every Tuesday to hear about what the Homes were doing; & helped to support them by paying a penny or twopence a week. The Head Office poems for us to learn, & little plays to perform. I still have my poem! I think it will interest you, so I’ll enclose a copy.

Trippit Family Looking down High Street, towards the end of Chapel Street, there is a large house on the right-hand side, which stands out noticeably, & which was the home of this family. I have already sent an old snap of Carrie Trippit. She was the organist of the Methodist Church at the age of 21. 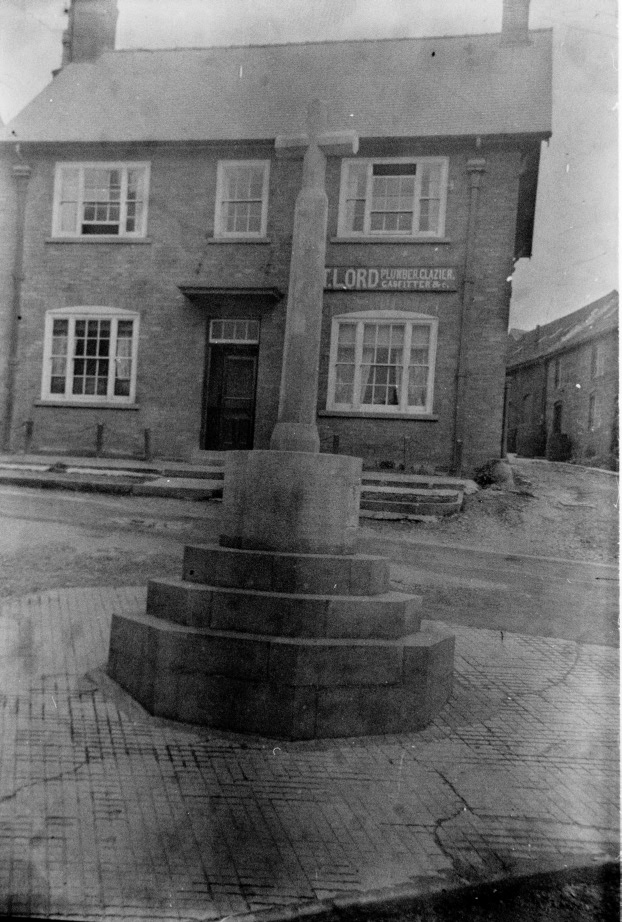 Butter Market I have already sent a view of the War Memorial, without the railings; but opposite to it, there was a small “abattoir”, next to the White Hart. On one of John Heron’s drawings of South Street, there is a space at the side of the White Hart, and my memory tells me that is where it was, but I could be mistaken. It could be the old building shown behind the memorial, next door to the space. My main memory of it is Mr. Kirk, the man who did the job. He was such a kind and gentleman, only small and slight, that we could never imagine him killing a fly, still less animals.

Fish and Chip Man This used to come from somewhere outside Caistor, and park in the Butter Market. Once a week, I think. The main thing I remember is the awful smell.

Lane between Varlow’s shop and ours I have written on the back of he South Street photo about this, but I haven’t mentioned the tombstone-makers at the top of the lane, in the lane outside the gates. Wonder if it is still there!! Also on the right-hand side of the lane next to the stables, was a pig sty. It was a soil patch, behind a wall about three feet high, with a small brick hut, presumably where the pig slept. I never knew it used as a pig sty, but I decided to make a garden of it. In digging, I found a “cartwheel penny”, the first copper penny made, which I still have.

Town Hall Cinema In the 1920’s someone started a mobile cinema – yes a cinema! – in the Town Hall on Saturday afternoons! Entrance 2 pence. Either it didn’t pay them, or they got fed up with its frequent breakdowns, because it didn’t last very long!

Buses None for a long time, most people coming by train & Mr. Russell’s bus. Then “they” started a bus a bus in the morning, to take people to Grimsby, and another one to bring them back in the evenings. No others!

Varlow House I mentioned this to Mr. Jones as being the hotel; but on looking at another card, I realise it is the house next door, on the corner. I don’t remember who lived in the hotel house. 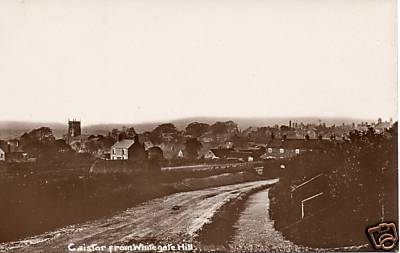 Whitegate Hill View On one of the new cards which Mr. Jones sent to me, there is a row of three small houses. In the last one from the end of the road, the wright family used to live. He was Wright by craft, as well as name! – wheelwright and blacksmith! There is a small building next door, which could well have been his forge, if my memory is correct, There were two daughters, one of whom was named Olive Rhoda.

Hundon Manor This place was just outside, on the Brigg Road, and was owned by the Lancaster family. Lilian Lancaster was my teacher in Sunday School, and we exchanged Christmas Cards every year until she died about three years ago (this was written in 1987), at more than 90 years old. She went to live in Spilsby many years ago. The manor was taken over as a Y.H.A. hostel, but is not one now (I phoned to find out). I suppose now it could be demolished.

Brass Band In the 1920’s this band was good enough to compete at the Manchester Belle Vue Band Festival, which was ‘quite something’ in those days! Bands of the calibre of Foden’s took part!