Miss Glew (clothing), Crompton’s Outfitters and Mrs Cross. Photograph by Alan Dennis Miss Glew sold baby’s clothes and all needlework supplies. Jessie Bryan writing in 1980 about the early part of the C20th says, “If a girl went as an...

JUMBLE SALE. — HeId in the Church School on Friday week, when surplus articles which had been left over from the previous week were sold. Over £2 was realised, and goes to the funds of the Church Needlework Society. Hull...

Local History Book SaleI have collected from the home of Margaret Saunders all the unsold...

The information board has now been erected on the Caistor Hospital site now known as... 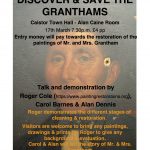 Discover and Save Mr. and Mrs. Grantham 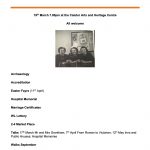 Mary Wilkinson – “Rhodes lived at 100 Brigg Road but none left in Caistor now.” Peter Radcliffe, ” On the right, on the part between the corner after Canada lane, and the Caistor signs.”

Mary Wilkinson – “My great Uncle George Rhodes drove for Browns for many years (and told me off when I when I sat at the back waving to boys out of the window!) good old days!”

Alan Brown Dad worked alongside Frank Capp and they were great friends. I played darts with them both quite often. Frank was a regular in my tropical fish shop, (as was his brother Dave)

Anne Townsend I remember getting very large cardboard boxes from them to use as packing cases when I moved house. They were very helpful in the Stores.

Janet Burgin I remember coming to HM to pick mum up on a Saturday from work, she loved working there. Valerie Adams Janet Burgin who was your mum? I wondered if I worked with her! Janet Burgin Julie Leadbeater

Darren Mckay oh what a shame the photograph is taken when it’s run down and closed. Remember the big tractors shown in the large windows. Nick Parrott Yes it was a fine building and thriving business in the ’70s Darren.

Valerie Adams My dad Vic Edge worked there and I followed from 1981 to 1989 – I also worked with Julie Leadbeater, Chris Barney, June Parrott, Janet Borrill, Margaret, Hedley Giddings – Good times with some memorable people! Alan Brown You missed off my Dad, Valerie, LOL. If you have forgotten him, then at least you cannot have forgotten me. I used to babysit you all almost every week for years! – Your Dad sold me my first (Vespa) scooter for the magnificent sum of £2. Valerie Adams Alan Brown, of course, I couldn’t forget Geoff, your mum and dad were great friends an neighbours, I can remember spending lunchtimes with them when I was very small.

Dawn Lister I used to walk past there on way to and from Nanna & Grandad Young ….they lived at Fairview – the bungalow roof can be seen in the background – I used to cheat and go up the gulley in between Hartford yard and the bottom of the garden.

Rev. David Saunders description: “This was pulled down soon after I took the photograph in 1984. I do not know when it was built. From 1851 a Joseph Sanderson had a business on Nettleton Road as a builder. He was born at Keelby and in 1841 was on South Street than a Joiner’s Journeyman. He married Elizabeth Cheeseman in September 1842 at Cabourne. He had a builder’s apprentice in 1851, but in 1861 he was down as a master carpenter with no employees. In 1871 he was a builder again and in 1881 was also a cabinet maker. There was now a Sanderson’s Row for the first time, probably built by Sanderson.

In 1891 Joseph’s son, Robert, was living in Nettleton Road and his trade was a cabinet maker. His father, Joseph, had died in April 1889. Robert, with Harriet, his wife, had his mother with them. There were no children in 1901. In 1911 they were on their own (Robert 65) still on Nettleton Road.

Joseph had made a will in 1888. It was simple – it made sure his widow, Elizabeth, had enough for life and then most of the estate went to Robert. Elizabeth’s will of 1905 shared out her property between the three children.”

Eileen Mumby gives the following description: “This shop was for many years Houlden’s (2 generations) then Dawson’s, men’s and women’s drapery; boots and shoes – a very good shop indeed. Mrs. Grace Watson (nee Houlden) gave the following information: Her father John William Houlden came to Caistor from Woodhall Spa in 1900, aged 24, to manage a tailor’s shop in the Market Place (now part of Costcutters). In 1908 he moved to an empty shop to start his own business in Cornhill. This shop was owned by Mr. Robert Taylor, a nephew of a Miss Turner who lived to be 100. Mr. Taylor lived in London. At some later date, Mr. Houlden bought the premises from Mr. Taylor and continued his business as a tailor, draper and boot and shoe retailer until he retired in 1956. Mr. Houlden’s daughter, Grace Watson, continued to run the business until her own retirement in 1972 then Dawson’s took over for about ten years.

In Mr. Houlden’s day, there were three men working ‘on the board’ at tailoring – two of these were Mr. Hugh Wilkinson and Mr. Dixon. Mr. Dixon lived in the house where Nurse Towle now lives. The Dixon’s had a lodger who was a motor-bike riding district nurse. Mr. Dixon later set up as a tailor on his own and made Jack Mumby’s wedding suit. He later went to Scunthorpe.

Young Grace Houlden had violin lessons with Miss Bullen and piano lessons with Mr. Storr. She went to the Methodist School until the age of eleven (the family was Wesleyan) then to the Grammar School. She went into her father’s business and eventually became a partner. Her brother William Priestley Houlden also followed a career in the retail trade being first apprenticed to Mawer and Collingham in Lincoln; then he had further experience in Hull and eventually became a buyer for Selfridges in London.

The Caistor business became a very successful shop selling men’s and women’s clothing, drapery, haberdashery and later, in Mr. Watson’s time, curtains and carpets. A Mr. Mudd came as another tailor in the town and Mr. Houlden discontinued this side of the business and concentrated on ready-made clothes. Mr, Mudd made blazers, etc. for the Grammar School. A Miss Glew kept wools and embroidery materials in a separate shop and Mr. Lane sold children’s clothes and Houlden’s did not rn the same lines as other small retailers. ‘We didn’t overrun each other in those days,’ Mr. Watson said.

Houldens sold all sorts of ladies’ wear and underwear besides men’s clothes including strong cords for the men working on the land and in the mines at Nettleton. Before rubber wellington boots came in galoshes were sold in the boot and shoe department. Pre-war the underwear was cotton then rayon and locknit.”

Steve Critten I almost bought this property in the ’80s but I couldn’t get a mortgage as it had what they call a “flying freehold”. The 3rd window on the top floor (right) belonged to this property, but it was over the property next door. Because of the lack of computerisation, it was difficult to insure as you couldn’t guarantee next door was insured to the same level or at all.